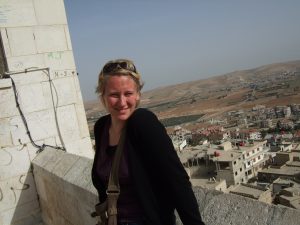 I am an independent, self-employed* researcher & consultant based in Leiden, the Netherlands. My work focuses on Syrian family law, (transnational) religious marriage and divorce, and intercultural integration, migration and gender issues in the Netherlands.

Before finishing my PhD on Syrian family law at Leiden University, I have completed degrees in International Law and Arabic (Leiden University), specialising in human rights, refugee & gender issues, and Islamic family law. During and after my studies, I also looked in detail at the UN Declaration on the Elimination of Violence Against Women (CEDAW) and worked for a Palestinian NGO in the field of human rights and rights of women.

After my PhD, I worked as a postdoctoral researcher at Maastricht University, where my socio-legal research focused on religious marriage and divorce practices in a transnational context, and women’s rights issues in the Netherlands, including marital captivity and forced marriages.

I am the author of Family Law in Syria: Patriarchy, Pluralism and Personal Status Laws (London: I.B. Tauris, 2016). This study is based on extensive, ethnographic fieldwork in Damascus (Syria), consisting of interviews and court observations in three (Muslim, Catholic and Greek-Orthodox) personal status courts. My work has also appeared in edited volumes and internal journals, including Sharia Incorporated: A Comparative Overview of the Legal Systems of Twelve Muslim Countries in the Past and Present (2010), Family Law in Islam: Divorce, Marriage and Women in the Muslim World (2012), Electronic Journal of Islamic and Middle Eastern Law (2014), and Islamic Law and Society (2018).